The sole remaining church on Nozaki island is located in the former Nokubi village. The small red brick church stands atop a hill, watching over the remains of the settlement. Together with Funamori in the south, Nokubi was once home to devout Christians. The parishioners, 17 families in all, willingly embraced hardships and came together to raise funds for the construction of the church that would carry their legacy for generations. 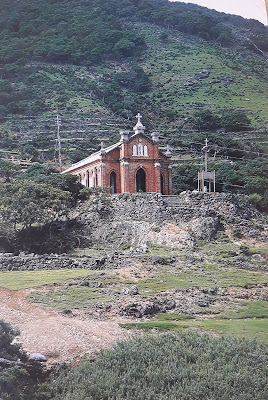 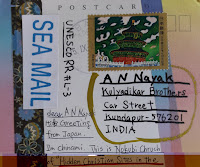 Thanks to Ms Chinami. She has used a 1982 stamp on Japan China Relation. The stamp shows UNESCO world heritage site, Temple of Heaven, China.

The Buen Retiro Park  is one of the largest parks of the city of Madrid, Spain. The park belonged to the Spanish Monarchy until the late 19th century, when it became a public park. In 2021, Buen Retiro Park became part of a combined UNESCO World Heritage Site with Paseo del Prado. 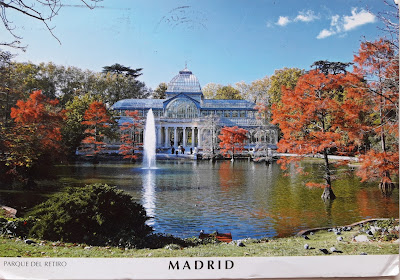 Puy de Dôme is a lava dome and one of the youngest volcanoes in the Chaîne des Puys region of Massif Central in central France. This chain of volcanoes including numerous cinder cones, lava domes and maars is far from the edge of any tectonic plate. Puy de Dôme was created by a Peléan eruption, some 10,700 years ago. Puy de Dôme is approximately 10 kilometres (6 mi) from Clermont-Ferrand. The Puy-de-Dôme département is named after the volcano. This site is inscribed in UNESCO world heritage list. 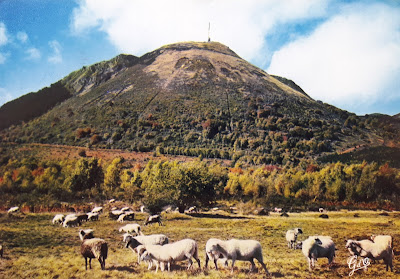 Thanks to Ms Maud. On the left is a heart shaped stamp from Heart and Bottle from Chanel no 5 Perfume. She has taken one from set of 3 issued in 2021. On the left is green definitive featuring Marianne.

The Golestan Palace, also known as the Gulistan Palace and sometimes known as the Rose Garden Palace, is the former royal Qajar complex in Iran's capital city, Tehran. One of the oldest historic monuments in the city of Tehran, and of world heritage status, the Golestan Palace belongs to a group of royal buildings that were once enclosed within the mud-thatched walls of Tehran's arg ("citadel"). It consists of gardens, royal buildings, and collections of Iranian crafts and European presents from the 18th and 19th centuries. 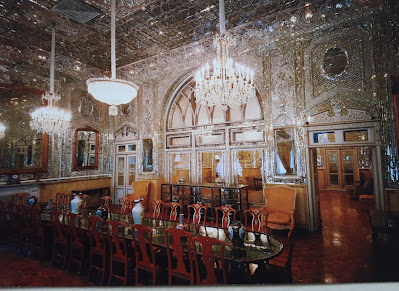 Mainz, Speyer and Worms are known as the SchUM sites, for the first letters of their medieval Hebrew names. The three cities form part of what was once referred to as "Jerusalem on the Rhine."
They were highly influential in their contributions to Jewish language, religious studies and religious architectural style. 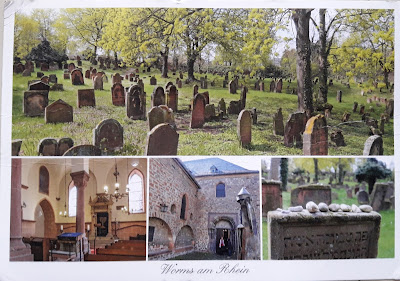 Thanks to Ms Svenja. 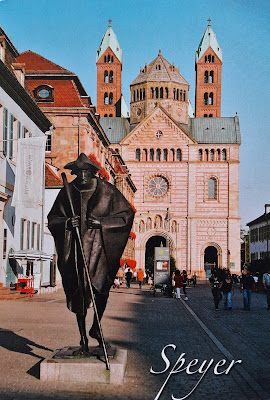 Thanks to Ms Lestin. She has used a flower definitive.
Posted by nagi7 at 10:51 AM No comments:

The Solomon R. Guggenheim Museum, often referred to as The Guggenheim, is an art museum located at New York City. It is the permanent home of a continuously expanding collection of Impressionist, Post-Impressionist, early Modern, and contemporary art and also features special exhibitions throughout the year. In 1959, the museum moved from rented space to its current building, a landmark work of 20th-century architecture designed by Frank Lloyd Wright. 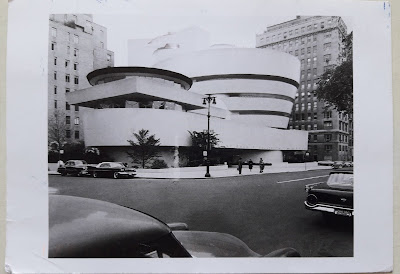 Thanks to Mr Brian of NewYork. He has used 8 cent stamp featuring Mahatma Gandhi. On the left is 2021 definitive on Brush Rabbit. In the center is a stamp on belt buckle from western wear series. This set of 4 stamp was issued in 2021. The green stamp features squirrel tree frog  taken from set of 4 on frog series issued in 2019.

There are about 50 castles in Luxembourg which includes fortresses and residential chateaux.  Most of them are from middle ages. 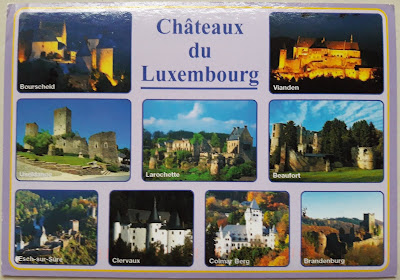 Thanks to Ms Valerie. She has used two rose stamp from a set of six issued in 2017. On the left is Rose-Grand duke Henery and on the right is Rose- Grand duke Jean. Nice postmark on covid vaccination.

Bath is the largest city in the county of Somerset, England, known for and named after its Roman-built baths. The city became a World Heritage site in 1987, and was later added to the transnational World Heritage site known as the "Great Spa Towns of Europe" in 2021. Georgian architecture, crafted from Bath stone, includes the Royal Crescent, Circus, Pump Room and Assembly Rooms where Beau Nash presided over the city's social life from 1705 until his death in 1761. Jane Austen lived in Bath in the early 19th century. 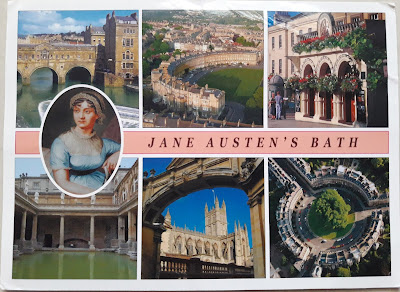 Thanks to Ms Nat. She has used classic science friction character Frankenstein by Mary Shelley issued in 2021. On the right is one stamp taken from set of 12, issued in 2020, showing Micheal Burnham from Star Trek series.
Posted by nagi7 at 3:43 PM No comments:

Skara Brae is a stone-built Neolithic settlement, located on the Bay of Skaill on the west coast of Mainland, the largest island in the Orkney archipelago of Scotland. Consisting of ten clustered houses, made of flagstones, in earthen dams that provided support for the walls; the houses included stone hearths, beds, and cupboards. A primitive sewer system, with "toilets" and drains in each house, carried effluent to the ocean. The site was occupied from roughly 3180 BC to about 2500 BC and is Europe's most complete Neolithic village. Skara Brae gained UNESCO World Heritage Site status as one of four sites making up "The Heart of Neolithic Orkney". 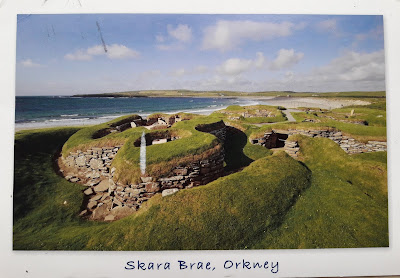 Thanks to Tiara Xiara. She has used one stamp from set of 8 on Battle of Wakefield.

Naumburg Cathedral located in Naumburg, Germany, is the former cathedral of the Bishopric of Naumburg-Zeitz. The church building, most of which dates back to the 13th century, is a renowned landmark of the German late Romanesque and was recognised as a UNESCO World Heritage Site in 2018. 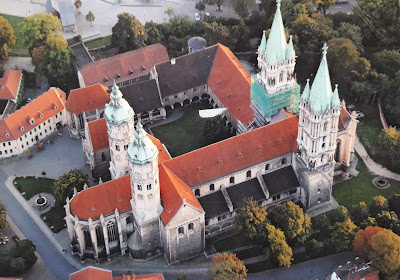 Thanks to Ms Ina. She has used two stamps showing Naumburg Cathedral issued in 2016. Nice postmark of WWF featuring a Panda is used to cancel the stamps.
Posted by nagi7 at 12:34 PM No comments:

Sarria is head of the region and the most popular starting point for the Camino de Santiago; many pilgrims choose Sarria because the distance from this point to Santiago allows them to cover the necessary kilometers to reach the Compostela. King Alfonso IX of León died in Sarria in 1230 while making a pilgrimage to Santiago de Compostela. 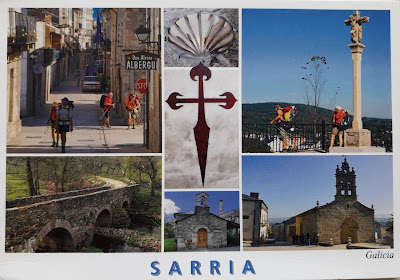 Thanks to my cousin Gayathri who was undertaking this sacred pilgrimage. She has used a 2017 stamp commemorating America UPAEP (Postal union of Americas ,Portugal and Spain) on tourist sites. It has a  C Tariff and an interesting 'n' security measure at the bottom of the stamp.

The Ilyushin Il-18 is a large turboprop airliner that first flew in 1957 and became one of the best known and most durable Soviet aircraft of its era. The Il-18 was one of the world's principal airliners for several decades and was widely exported. Due to the aircraft's airframe durability, many examples achieved over 45,000 flight hours and the type remains operational in both military and (to a lesser extent) civilian capacities. The Il-18's successor was the long range Il-62 jet airliner. 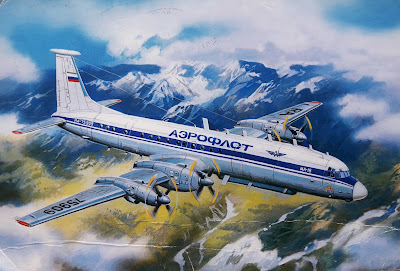 Thanks to Ms Aleksandra. The stamp she used is a 2020 joint-issue with South Korea featuring a brown bear. she has also used a  Postcrossing stamp that was issued in 2016 along with a 3p definitive.

Cork  is the second largest city in Ireland. The city centre is an island positioned between two channels of the River Lee which meet downstream at the eastern end of the city centre. 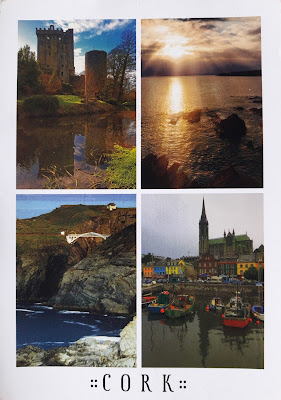 Thanks to Ms Jules.

Portomarín is a municipality in the Spanish province of Lugo. It is located on the pilgrimage route known as the French Way of the Camino de Santiago. 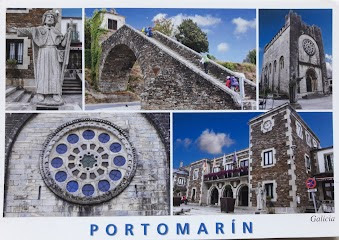 Thanks to my cousin Gayathri who was in Spain last month and walked this sacred route.
Posted by nagi7 at 12:03 PM No comments:

The Scrovegni Chapel, also known as the Arena Chapel, is a small church, adjacent to the Augustinian monastery, the Monastero degli Eremitani in Padua, region of Veneto, Italy. The chapel and monastery are now part of the complex of the Museo Civico of Padua. The chapel contains a fresco cycle by Giotto, completed about 1305 and considered to be an important masterpiece of Western art. In 2021, the chapel was declared part of the UNESCO World Heritage site of the 14th-century fresco cycles comprehending 8 historical buildings in Padua city centre. 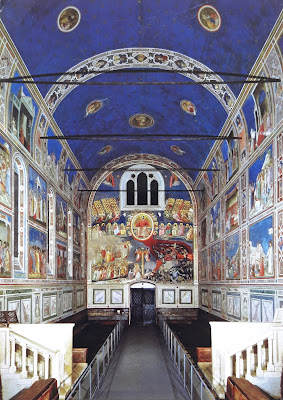 Kronborg is a castle and stronghold in the town of Helsingør, Denmark. The castle's story dates back to a stronghold, Krogen, built by King Eric VII in the 1420s. Along with the fortress Kärnan, Helsingborg on the opposite coast of Øresund, it controlled the entranceway to the Baltic Sea. From 1574 to 1585, King Frederick II had the medieval fortress radically transformed into a magnificent Renaissance castle. 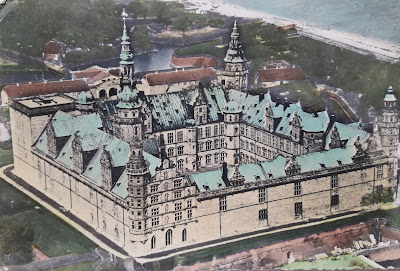 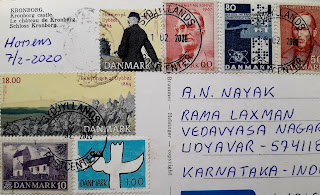 Thanks to Ms Hans.

Kaiyuan Temple is a Buddhist temple in West Street, Quanzhou, It was originally built in 685 or 686 during the Tang dynasty. The temple situated in the Mulberry garden of landlord Huang Shougo who was said to dream of a monk begging land from him for building a temple. He donated his garden and changed it into a temple with the name of "Lotus Temple. In 738 in the Tang dynasty, it was renamed "Kaiyuan Temple", which is still in use now. Behind its main hall "Mahavira Hall", there are some columns with fragments as well is idol of Lord Vishnu from a Vishnu temple built in 1283 by the Tamil Ainnurruvar Valanjiyar Merchant community in Quanzhou. The carvings are dispersed across five primary sites in Quanzhou and the neighboring areas. They were made in the South Indian style, and share close similarities with 13th-century temples constructed in the Chola Nadu region in Tamil Nadu. In 1983, the Kaiyuan Temple was designated as a national temple.
The Silk trade by sea brought the South Indians to China and the Chinese to Southern Indian ports and it is very likely the Indians took the knowledge of Silk cultivation and fabrics from China back to India. China had a significant influence on South India; examples of Chinese fishing nets in Kochi and fine china pottery still referred to as “Chini chatti” or Chinese pot in Malayalam and Tamil.
The postcard shows the Zenguo Pagoda and Renshou Pagoda. 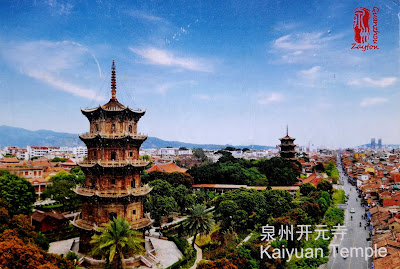 Abergynolwyn railway station is a station on the Talyllyn Railway near Abergynolwyn, Gwynedd, in Mid-Wales. It is 6.55 miles (10.54 km) from Tywyn Wharf. The name 'Abergynolwyn' means 'Mouth-of-the-River-with-a-Whirlpool'. This now inscribed in UNESCO heritage list. 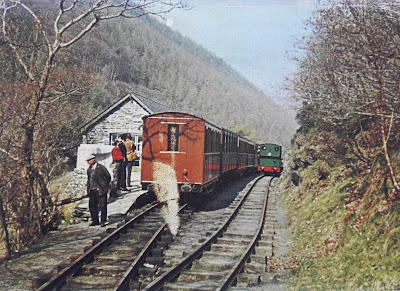 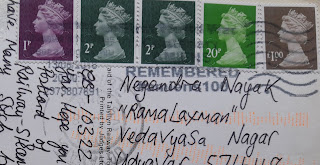 The World Wide Fund for Nature is an international non-governmental organization founded in 1961 that works in the field of wilderness preservation and the reduction of human impact on the environment. 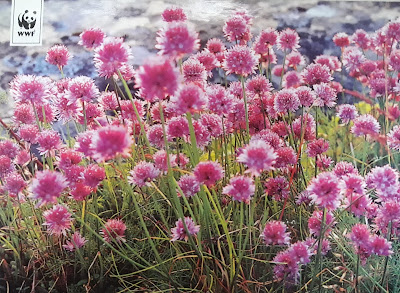 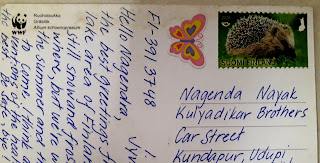 Namaste!! Welcome to My Blog

Hello Friends, I have been collecting Postcards since childhood. But it really picked momentum after I came across Postcrossing. My Goal is to collect at least 5 Postcards from each and every stamp issuing entities in the world. Please brighten my day by filling my Mailbox.
I also listen to Short Wave Radio Stations and collect QSL cards.

You are always welcome to send me posts to
My address
A N Nayak
"Rama Laxman"
Vedavyasa Nagar
Udyavar-574118
Karnataka', India 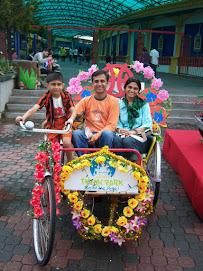 Me, my wife Asha and my son Siddharth 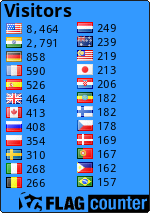 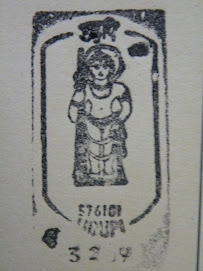